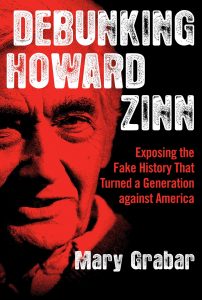 Debunking Howard Zinn:
Exposing the Fake History That Turned a Generation Against America
By Mary Grabar

Published in 2020, this is a robust critique of Howard Zinn’s best selling A People's History of the United States, which has sold over 2.5 million copies and is used widely in high schools and colleges around America. Zinn spins a Marxist tale of America as a country discovered and founded by white racists who oppress minorities at home and exploit them abroad. His dark account has inspired countless young people to attack a country they see as evil, destroying property, attacking police and ordinary citizens, and seeking to destroy traditional institutions, from the family to religious organizations, all in the name of social justice.