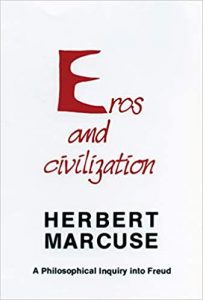 Eros and Civilization:
A Philosophical Inquiry into Freud
Published 1955
By Herbert Marcuse

Herbert Marcuse was a leading figure in the Frankfurt School, which sought to combine Marxism with Freudianism in what they called Critical Theory. As with Wilhelm Reich, Marcuse saw traditional Western society, with its roots in Judaism and Christianity, as the source of unhealthy sexual repression, and capitalism as the primary obstacle to freedom. Critical of both the Soviet Union and Nazi Germany (from which he escaped to the United States), he nevertheless became the ‘Father of the New Left’ which rose in the 1960s, inspiring many of its leading figures, including his student Angela Davis. Critical Theory would reappear in Critical Race Theory, which is currently the basis for the racialization of almost all issues in America today, including in institutional racism theory, intersectional theory, and white privilege theory.