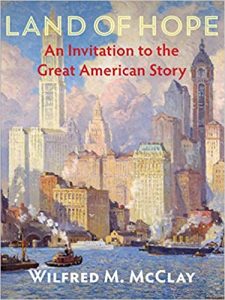 Land of Hope:
An Invitation to the Great American Story
Published 2019
By Wilfred M. McClay

This history of America is uplifting, hopeful. It is an excellent counter to the gloomy work of Howard Zinn, which sees American history as a long, sad tale of oppressed groups having to fight their oppressors. Land of Hope paints a picture of America in its proper context: a remarkable nation that shook off the established tradition of hereditary rulers, that was built around the idea that government should serve the governed, that the rights of individuals are paramount, and that those rights are not ultimately granted by governments but by a good Creator. These good foundations would result in hundreds of thousands of Americans dying to purge the nation of slavery, and fighting to counter and defeat oppressive regimes abroad, be they socialist, fascist or communist.