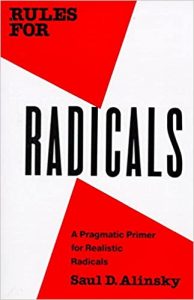 Dedicated to Lucifer, this book is something of a Bible for Leftist activism in the United States and beyond. The subject of Hilary Clinton’s college thesis, and the inspiration for Barack Obama’s community organizing, Alinsky’s work takes its inspiration from similar roots as Foucault’s: the Marxist dialectic with its prescription for stirring up group resentments against common ‘oppressors’, ultimately justifying violent revolution. Based on his own work in the C.I.O., once a communist-dominated labor union, Alinsky provided practical methods for organizing groups and communities, demonizing ‘enemies’, and using activism to go beyond deconstruction to destruction of traditional societies. His book’s dedication to Lucifer as “the very first radical” says a great deal about his atheistic intentions: “Lest we forget at least an over-the-shoulder acknowledgment to the very first radical: from all our legends, mythology, and history (and who is to know where mythology leaves off and history begins— or which is which), the first radical known to man who rebelled against the establishment and did it so effectively that he at least won his own kingdom — Lucifer.”