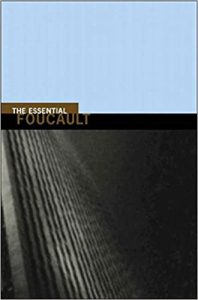 The Essential Foucault:
Selections from the Essential Works of Foucault, 1954-1984
Published 2003
By Michel Foucault

Michel Foucault was a French philosopher and one of the key figures in postmodern thinking, first rising to prominence in the late 1960s. He is currently the most cited scholar in the social sciences and humanities, and many academics consider his insights on power, government, politics, history, sexuality, and the state to be revolutionary. His book Discipline and Punish: The Birth of the Prison, published in 1975, is one of his most famous works. The book describes how massive technological advancements in the 17th and 18th centuries made it easier for governments to have power over their people. He analyzed the creation of the modern prison (and the move away from public displays of torture) to describe how these updated practices controlled prisoners and people in other social and economic institutions. Like Nietzsche, Foucault focused extensively on the physical human body and how it could be controlled by the abovementioned practices. The book is one of many examples where Foucault deconstructs modern society, retells history and rejects both absolute truth and reason in favor of a postmodern analysis. Although he rejected the Soviet Union’s brutal practice of Marxism, he adapted Marx’s dialectic to the Critical Theory that is at the core of the Leftist social justice agenda to this day, including Critical Race Theory, White Privilege, intersectionality, gender studies, and the cancel culture.