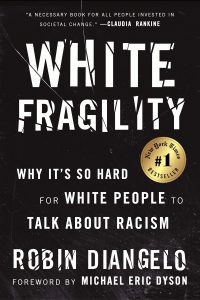 White Fragility:
Why It’s So Hard for White People to Talk About Racism
Published 2018
By Robin DiAngelo

Building on Critical Race Theory, this book finds racism deeply entrenched in American society. However, the anti-racist is in danger of being a racist by attributing negative stereotypes to another race, namely white people. The anti-racist doctrine also castes a shadow over otherwise normal interracial relationships, suggesting that racist tendencies are so deeply embedded in our culture that we are not aware of them and need someone else to point them out. This anti-racist notion is being used to educate people in various sectors of society to be sensitized to their own, formerly unknown, racial biases.