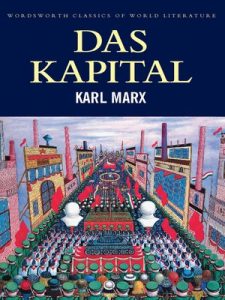 The first volume was originally published in German in 1867, the second volume posthumously in 1885, by Frederick Engels. A third volume was published by Engels in 1894, but not considered a significant addition to the first two. Although this work represents the most comprehensive exposition of Marxist theory, a Marxist Bible so to speak, it is in many places confusingly dense and limited in modern relevance by its focus on 19th Century capitalist economies, which have long since gone through dramatic structural transformations. In the light of modern science and economics, Marx’s theories of dialectical and historical materialism, economic determinism, and labor theory of value are seriously flawed. Nevertheless, Marxism has provided the ideological underpinnings for violent revolution into the 21st Century, and its understanding of inherent conflictual relations within human societies continues to be the basis for so-called Cultural Marxism, which espouses revolution and conflict across all aspects of human life.