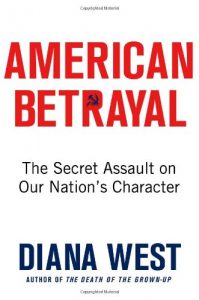 American Betrayal:
The Secret Assault on Our Nation’s Character
Published 2013
By Diana West

This is a well-written and important examination of the impact of Soviet espionage and influence in the United States. Drawing on the work of M. Stanton Evans’ Blacklisted by History, books on the Venona cables between Moscow and its agents in America, declassified in 1995 (Venona: Decoding Soviet Espionage in America, by Harvey Klehr and John Earl Haynes, and The Venona Secrets: Exposing Soviet Espionage and Americas Traitors, by Herbert Romerstein and Eric Breindel), and many other sources, West describes how Soviet influence in Washington resulted in America’s WWII Lend-Lease program giving priority to supplying the USSR with massive amounts of military materiel and other much-needed supplies, which not only helped Stalin defeat Hitler but likely prolonged the war and gave the Soviets an outsize grip on post-war Europe. Similar influence resulted in Washington supporting Moscow’s ally Mao Zedong and the Chinese Communist Party while undermining Chiang Kai-shek’s Nationalists, resulting in the establishment of the People’s Republic of China. These betrayals of America’s traditional values, typically covered up by those in power, would prove a poison that has since continued to corrupt the country through the spread of moral relativism and the evisceration of its founding principles.