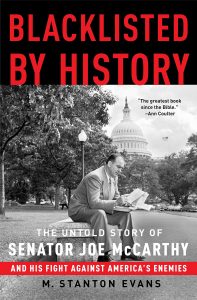 This is an exhaustive study of Senator Joe McCarthy and his crusade to expose and stop Soviet penetration of the United States government. Evans debunks the commonly held view that McCarthy was an unhinged bigot who abused his position in Congress to destroy the lives of countless innocent Americans. Rather, McCarthy discovered mountains of evidence that hundreds of Americans, many in sensitive positions in government, were indeed working for the Soviet Union, as spies and/or agents of influence. The floodgates to this Soviet ‘invasion’ were thrown open with the 1933 recognition of the Soviet Union by President Franklin Delano Roosevelt, and further expanded when the United States and USSR became allies in WWII. Evans exposes the harm to American interests inflicted by pro-Soviet and pro-Chinese Communist Party officials in the White House, State Department, Defense Department, Treasury Department, and other key departments.