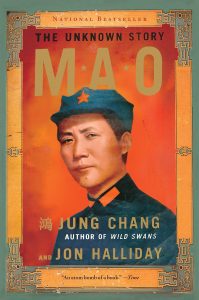 Chang, the author of the Wild Swans Over China, examines the man most identified with the founding of the Chinese Communist Party (CCP), its fight to seize power from the Nationalists in China, and its brutal policies as the ruling party that lead to the death of an estimated 70 million Chinese. This book reflects decades of research by Chang into Mao, giving insight into his character and the shaping of China into a Communist state.