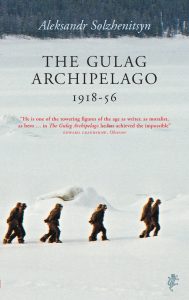 This is the book that alerted the world to the horrors of the Soviet Union’s prison system, to the injustice of its ‘justice’ system, to the cruelty of its regime, to the wholescale destruction of human lives, all in the name of building a Communist state, a socialist paradise. Solzhenitsyn tears the cover off the façade of decency and morality that the Communists tried so hard to sustain, with endless claims that they were serving the interests of workers, of international peace, of the undertrodden of the world. No. Their only interest was power, and there was no law, moral or otherwise, that would keep them from doing whatever they believed they needed to do to get it and keep it. Himself a victim of the Soviet prison system, Solzhenitsyn describes the suffering of millions, which reached its apex during Stalin’s 1930s purges, but was a feature of the Soviet Union throughout its existence.