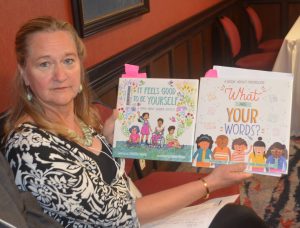 Brenda Lebsack, teacher of 30 years, former school board member, Orange Unified School District. Brenda fights to protect children from  “Comprehensive Sex Ed,” a hyper-sexualized narrative on gender that pulls children from their parents,  exposing them to direct communication with adults on sexual platforms.

I would like a Case Number concerning the evidence I turned in about the mental health crisis line Trevor Project /Trevor Space that is in our schools (SAUSD, and others) where minors are being mixed with random adults to chat about their sexualities.
As a teacher in SAUSD I am a mandated reporter and parents do not know that adult strangers (internationally) have access to their children through the crisis hotlines given to them through our schools. This is a serious matter and the red flags seem obvious.
If I need to resend screen shots, I would be happy to do so.

Screen shots where participants say, “I’m lonely and need a friend” and someone pops in and says, “I’ll be your friend, hugs!”… Screen shots of chat clubs for nonbinary pals, furries, witchcraft, regression space, chosen family, gay men’s club, roommates club, etc… Screen shots of a crisis text counselor advising a perceived minor to “share her phone number” with “new friends” she meets on Trevor Space after “building trust” while the counselor affirms the caller of having a four-spirit gender identity.
Thank you for your attention to this,

PS
Riverside County has a case number for an investigation.
Chino Hills has removed the number from their school district.
I turned this evidence in 4 months ago and I still have not received a case number.

Brenda’s Article in The Daily Signal

“Preferred Pronouns and More: What I Saw at Teachers Union Convention“ 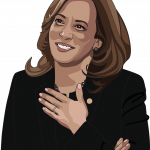 It was also evident that the teachers union is a lobbying arm of the Democratic Party.

I just attended the National Educators Association (NEA) Regional Assembly Conference virtually that was held in Chicago.  I tried to bring this issue up during public comments, but as soon as I said the word “Trevor Project“, NEA’s president, Becky Pringle, shut me down and said I was going off topic.  I was not going off topic at all.  I was addressing the topic of Mental Health Resources in our schools, which was the subject being discussed.  So I’m forwarding you this email that I sent to my state executive counsel (Calif Teachers Association). I sent a similar email to NEA leadership as well.  I hope you’re doing well and I hope we can connect again soon!  Feel free to share this info with others because this deception of parents is being enabled by our state and national teachers’ unions.  Then again, maybe this email will cause action.  Let’s hope so, but I’m not holding my breath.
Brenda
————————-
Dear CTA Executive Council,
In attending the NEA RA Convention and seeing the huge concern for school safety exemplified in the NBI’s and Amendments, I am trying to understand why President Pringle cut me off when I was addressing safety issues as it relates to the Mental Health and Suicide Crisis Hotlines recommended through our schools.   I have evidence that minors are being mixed with random unvetted adults to explore their genders and sexualities through Trevor Space – recommended through the Trevor Project, and this is being done without parental consent or knowledge.  I have evidence that our National Suicide Hotlines (and Planned Parenthood partnering with school districts) are surveying kids via text about their gender(s) and sexualities which violates Ed Code 51513.  I have evidence that our crisis text lines are advising minors that there are unlimited genders to choose from and advising them to share their personal information on these Chat spaces with international strangers who have virtual identities.  If CTA and NEA truly care about the safety of our kids in public schools, then why won’t they address this issue?  Don’t parents deserve the respect of being informed about this?  These numbers are in almost every student bathroom (grades K-12) in my school district, which is 98% Hispanic, a high immigrant, Title 1 district.  I hope President Boyd and President Pringle will address this issue and include parents, of all races and language groups, in addressing this issue that impacts our students nationwide.  The thought that our schools may be enabling on-line sexual predators is a serious legal matter and should not be ignored.
Thank you,
Brenda Lebsack 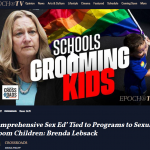