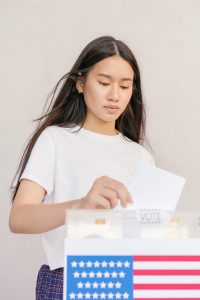 The Midterms are almost over.

President Biden led Democrats to the best midterm results for a first-term president’s party in 20 years.

Some places are still counting. This fact is indicative of a corrupt and broken elections system.

One of the states still counting (as of this writing) is Arizona (for its governor).

Arizona is especially interesting for a few reasons. 1. The person who just declared victory is the person who refused to recuse herself from overseeing the election! And 2. Is the person who in that role sent out 1000s of erroneous ballots less than a month before election day, and had  72 of 115 polling centers, (62.61%) see “material problems with the tabulators not being able to tabulate ballots,” resulting in “substantial voter suppression.”

This person who should be arraigned for election interference as Secretary of State just declared herself the victor.  Only a partisan could be OK with this.

Listen to the podcast

Apart from the persistent embarrassment in Arizona, and its assault against American citizens’ most sacred right and duty, a run-off election also is afoot in Georgia, the state of the famed, magically-somehow-NON-election-denier, and iconic champion of the Left, who was just “robbed” yet again of a second legitimate win

With these exceptions results are more or less in. Republicans took the House with an at least 220 to 213 seat majority, and until Walker-Warnock is decided, a 50  – 49 seat minority in the Democrat-controlled Senate. Remember also the Vice President (presently Kamala Harris (D) casts the deciding vote in the Senate in the case of a tie. Even if Walker defeats Warnock in GA, the Democrats still have the tie-breaking vote of Kamala Harris.

Two realities cause these results to be defined by both Republicans and Democrats as a “failure” or a disappointment for Republicans:

This is just a small list of established facts from the past two years.

The Washington Examiner  summed up the Republican midterm performance with this question, “If Pennsylvania Republicans cannot beat a stroke victim who once held up an unarmed black man at gunpoint, who can they beat?”

Several news outlets pointed out record success for Biden and the Democrats. The American Independent pointed out, “Biden leads Democrats to best midterm results for first-term president’s party in 20 years,”

These poor results came as a complete shock to Republicans. It was said to have led to “soul-searching,” but from what I can see it has led only to finger-pointing.

… he immediately became the singular cause of all Republican failures and disappointments.

But this analytical genius is not all that impressive, because Trump, as we know is the cause of everything bad in the world, and has been since Jun 16, 2015.

Of course, President Trump did not help his own cause by foolishly attacking his own governor, and one of the most effective and genuinely liked MAGA figures alive, while the latter was still running with votes for his reelection just two days away. Then out of the blue, President Trump childishly mocked another fine and promising champion of MAGA values, Glenn Youngkin.

Apart from Trump being his own worst enemy, and the cause of all Republican struggles (a tautology because of course he’s the cause of everything bad), the professional chattering class, alarmists and hand-wringers came up with a few other points of political observation and analysis.  They are interesting and valuable to read.

Here very briefly are my few words on the Midterms.

I make two points. 1. The democratic process (campaigns and elections) is a form of war, 2. The combatants in America have different beliefs regarding elections

Campaigns and elections are a form of war in which (in America) two tribes seek to conquer and destroy their opponents in pursuit of the spoils of war, namely power and wealth. Since victory affords the victor power and wealth,  candidates make effort to convince voters that, if elected, they will use this power and wealth for the greater good, or for the good of their constituents.

Ordinarily, war cripples its players, participants, and territories. A theatre plagued by war is robbed of the resources it needs to grow, develop, and prosper.

The way America was able to stay healthy and strong despite these “wars” (elections) until recently was because combatants held a value even higher than the mere acquisition of wealth and power. They shared a common love for our sacred and beloved land, the United States of America. Yes, they were desperate to win and seize control over so much power and wealth. But that passion and ambition was not to be chased so madly that it would hurt our beloved country.

What has blossomed in recent times tragically is that anti-Americanism has infected American institutions (especially education) and this all-important governor and guard rail of a shared love of country has been removed. What remains now is only war. This is the first great tragedy of our current situation. All we have is war. We do not share a love of country.

The second tragedy in our elections presently is that campaigns and elections became so bloated and so gorged with lucre that now war never ends. We have lost the cycles of campaigning, voting, concluding, and governing. All we have now is one incessant, bloody war, that never stops. A child is shot. This is a campaign moment. A pubic figure has betrayed our trust. This is a campaign moment. All we have is war. No country. No pause.

I believe wise political analysts are not especially needed to scrutinize the vicissitudes of our recent midterms per se. Rather mature analysts should urgently dedicate themselves to the study of what has become of the American democratic process itself, and whether or not it can be rescued, and our country with it.

The other side believes in winning, not in elections. This second side believes that their winning is the only hope for the preservation of the country. This second side believes that elections cannot be trusted and that voters cannot be trusted. They believe that if the wrong side wins, America will be irrevocably harmed and its citizens endangered and that it is therefore the moral duty of this side and its candidates to win at any cost. The future of America depends on them winning, no matter what it takes. Even using violence if necessary.

Perhaps we can create a simple analogy. Imagine a boxing match in which one side believes in the sport (boxing), and the other side believes in winning. Boxer A thinks, “Of course, I want to win. I will do everything in my power to prevail over my opponent, but I will never hurt the sport.” Boxer B, on the other hand, thinks Boxer A is a horrible and dangerous person. There is nothing wrong with me putting a horseshoe in my gloves. My greatest obligation to Boxing fans everywhere is that Boxer A stands absolutely no chance of winning. Regardless of what it takes to ensure the outcome the world needs and deserves.

In this case, Boxer B is sure that they have done the world good by putting horseshoes in their boxing gloves. They are behaving courageously, virtuously, and morally. Boxer A cannot win.

This is the case in American electoral politics today. Side A believes in elections as sacred, (the same as Boxer A will honor the sport, even if it means losing). Side B believes winning is sacred. Lying, cheating, and stealing are fine and good. They are saving America.

Immediately prior to the 2020 Presidential election, Side B put in place a great many instruments in their determination to win at all costs, even at the cost of true elections. Side A was asleep at the wheel and was slaughtered in the ring. For two years since 2020, Side A has been trying to plug a thousand holes of fraud and deceit that were put in place utilizing “the Pandemic,” and the cynical and false narrative of “voter suppression.”

So far Side A clawed its way back up the cliff and recovered the House of Representatives.

The work now for both sides is to pause the war and collaborate to govern.  The work for the Republicans is to keep fighting even unto death to recover (or perhaps build for the first time) true, reliable elections. And for God’s sake, stop fighting inside the party.

Listen to the podcast here: