Thomas Cromwell’s Triumph of Good: Cain, Abel and the End of Marxism has been released by East West Publishing (December 17, 2021), and is now available on Amazon in print and digital editions.

Triumph of Good: Cain, Abel and the End of Marxism 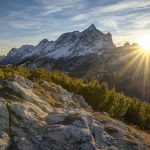 The “Triumph of Good” portion of the title quickly caught my attention, and then the “Cain and Abel and the end of Marxism” subtitle continued to pique my curiosity even further. What could inquiry into two biblical figures of antiquity possibly  have to do with upending the contemporary Marxist influence in society?  Remarkably, the author covers both topics in clear and thorough detail as well as provides extensive appendices that support and elaborate the book’s unique insights and propositions.

Triumph of Good we eventually learn, refers to the successful fulfillment of America’s Providential role, often referred to as “A City Upon a Hill.”  The Cain and Abel story originating in the Biblical book Genesis is used as the paradigm through which Cromwell explains history’s inescapable clash between two quintessential antagonists, one representing Good, the other Evil. In the case of our present time, the Cain and Abel antagonists manifest in the current vying ideologies of our time, one (Cain) representing the atheistic worldview (Marxism/Critical Theory), and the other (Abel) representing a theocentric worldview (most particularly, American Exceptionalism). 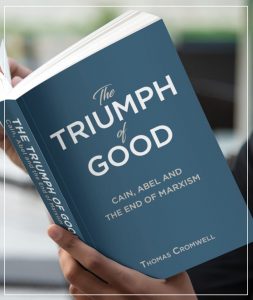 The author exposes the evolution of Marxist/atheistic thought and how it has metastasized from its beginnings in 19th century Europe to become the mainstay, worldview of the American Left, the current Democratic Party, and it’s supporters in education, the media and elsewhere.  Cromwell provides,  in layman’s terms, a detailed account of the progression and inner elements of the Cain worldview. So it is a good read for everyone. He concludes with a challenge to those who believe in America’s Providential role as Abel, a mission to rise to our responsibility by incorporating lessons from the Bible (found in Triumph’s Chapter 4 “The Way of Abel”). In the end Cromwell reveals  the path we must go to restore America’s true purpose expressed in the country’s founding and divine origins.