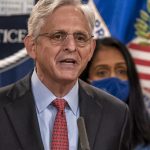 In an historically unprecedented act, Attorney General Garland treads into chilling treachery against parents who live and have children in the United States. Senator Josh Hawley could barely contain his horror and contempt for such an act.

Corruption is one thing. Attacking parents and children using the FBI to perpetrate such evil is quite another.