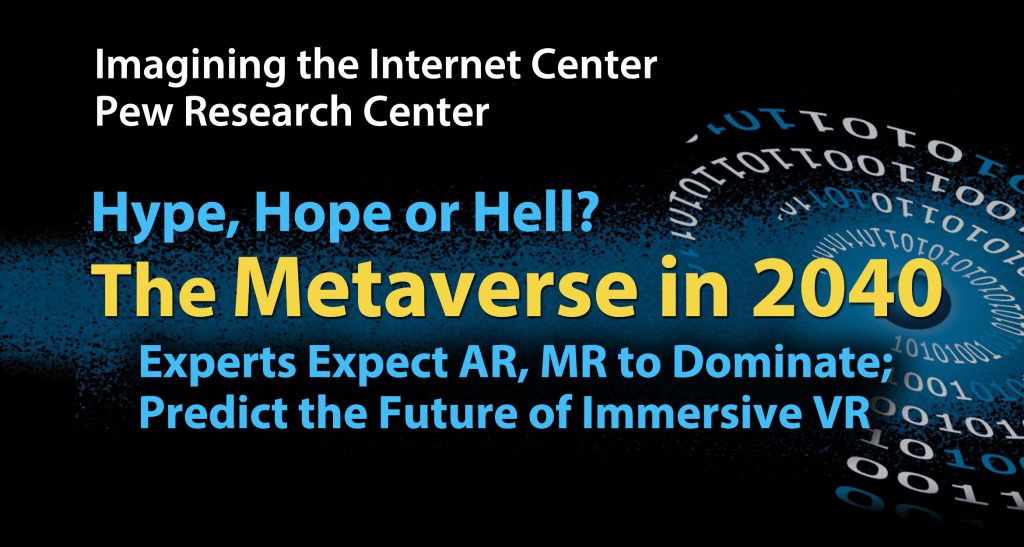 Settlement Project President Speaks on the Future of the Metaverse

On September 15, 2022, Dr. Frank Kaufmann, President of the Twelve Gates Foundation, offered brief thoughts on the future of the Metaverse at an online event sponsored by the Pew Research Center and Elon University. Dr. Kaufmann was one of six experts invited to speak at the Twitter Spaces audio program, “Hype, Hope or Hell?: The Metaverse in 2040”, hosted by Lee Rainie and Janna Anderson.

Frank Kaufmann: I’m the head of Twelve Gates Foundation [which] is rooted in interreligious relations. My relationship with this particular work is the interface between technology and technological development and private and public morality. And so my thoughts about the emergence and potential of the Metaverse is related to this issue of that particular interface. I believe that human beings are limitless in their creative capacity, and that is an unstoppable thing. I think it’s deliberate about us. I think the fact that every human being has a dark side is not an original intention. And so the inexorable evolution from drudgery to absolute creativity that happens by its natural force of technological development, but tragically, morality and virtue has does not keep pace with the inevitability of technological development. So I believe that regardless of how, and some of the commentary here this afternoon, has been positively frightening for me to listen to. But that notwithstanding and the warnings we’ve had from every speaker, nevertheless, nothing will stop this technology from advancing as far as it possibly can. And and even beyond what we might imagine. So, if we look at the progress from drudgery, namely working to survive toward the liberation of creativity, namely working to create, what we end up with, obviously, are creators and consumers. And what we end up with is instruction and entertainment. So basically creators are producing instruction and entertainment, and consumers are seeking both, but at any one time seeking either one of these two things. So the dark side of that reality is that we don’t only just come up with a greater capacity to instruct and inform, and a greater capacity to learn and grow, or a greater capacity to create entertainment that’s more wondrous, more wanting, more vaulting, more delightful. Not only do we create both and consume both, but likewise, the dark side of human reality is that the instruction we create can be more profoundly imperfectly demonic in its capacity, and the entertainment we create likewise, similarly, and the instruction, and the information we seek, likewise can either seek to enhance our glory or to degrade us to the depths of depravity. So we can seek instruction on how to amplify a demonic or dysphoric side of ourselves. We can seek entertainment, and this has been alluded to, that is positively degrading and abusive. So, my view on the matter is, and I appreciate every speaker, anticipating this, recognizing this, and even acting to create such things as the XR Guild and I think it was Louis who spoke about the urgent need for regulation on platforms and so forth. But my view is that what’s additionally needed are systems that are capable of forging virtue and morality in individuals. I don’t believe it can be regulated. I believe that what once functioned as classical, religious and spiritual obligations on people, these were where they started or were able to keep in check the departure from the basic human qualities with which we need to treat one another as several of the speakers have also pointed out. And so the rear view mirror that, I believe it was Toby that just mentioned, it’s not available in technology, it’s also not available in spiritual and religious life. So if we look at the radical force, the radical, the juggernaut or the speed at which technology is developing, there needs to be developed likewise, systems for the creation of virtue. That is every bit, not competes with, but as every bit as exquisite, as masterful, as remarkable in its capacity to speak to the human being as a spiritual entity. While all this is happening, I don’t believe that it can be stopped. And I don’t believe that regulation has the capacity to hold in check the reproduction of both incredible good and incredible evil. The last thing I’d like to say is that one of the good models, I think, when we’re looking at the dangers of the Metaverse and AR and VR and so forth. The dangers is that if we shift our look away from ourselves, and as the object of the dangerous, but rather to the ones we love as the ones in danger. How do I feel, as Louis described, about the capacity to build every single thing about our lives? That’s that’s horrible for myself. How do I feel about that happening to my wife all the time, or to my young daughter all the time? How do I feel in my confidence to create the capacity for intimacy with my conjugal partner over against the amount of the subtlety of knowing everything about this about my partner? Because of what people are doing? Well, I’m trying to live my life and so forth. So I think part of the additional way of enhancing our determination or our pursuit of having moral and virtual building within human beings is adding this net of where our passions lie. It’s kind of like, take my life, but don’t touch my child. And so if that can be embedded into how we are considering how to protect the human experience against the emergence of what will happen, even greater and harder than much of which has been introduced already.